Background and objective: Determining the relationship between morphological, physiological and biochemical (qualitative) characteristics is necessary to increase the production and quality of horticultural products, such as strawberries. Over time, a variety of statistical approaches have been emerged in order to evaluate the relationships of variables, and old-fashioned statistical solutions have gradually replaced with new ones with more scientific and reliable results. Meanwhile, the new PLS-PM approach, due to its new methodology and more reliable and attractive results, has more applications than classical sttatistical methods.
Materials and methods: Some morphological traits, flower, fruit, qualitative (biochemical) and yield in eight genotypes of strawberry were studied in a randomized complete block design with three replications for four years. Different statistical methodologies were utilized i.e. estimating correlation coefficients, stepwise regression, simple path analysis, and to gain a more accurate relationships, data analysis algorithm performed with advanced PLS-PM approach (including Cronbach's alpha, factor load coefficients, path coefficients and coefficient of determination, the goodness of fit and cross-loadings).
Results: The results showed that despite genetic variation among cultivars, there was a significant correlation between fruit yield with fruit traits, number of leaves, flourescence characteristics and number of crowns per plant, and fruit size and anthocyanin level. The number of flourescence, size, volume and number of fruits, date of formation of runners and flowering period accounted for 88.3% of the variation of yield and its most important components. Number and size of fruit had the most direct effect on the increase of fruit yield. Flowering had the most effect on fruit yield and then morphological traits had the most effect on biochemical and inflorescence traits. The size and volume of fruit was affected by morphological traits more than others.
Conclusion: In this study, various statistical approaaches have been used for understanding the relationship between evaluated traitsin of strawberries, where none of them was as suitable as the recent but unfamiliar PLS-PM approach, indicating the important effect of flowering characteristics on increasing the fruit yield of strawbwrry. Applying the new PLS-PM method in comparison with the old statistical methods, and by categorizing the traits, it was concluded that due to their different nature, in relation to the increase in the yield of fruit yield, flowering traits were more effective compared to the other traits, and the morphological traits including: height of inflorescence, number of leaves, ear length, crown length, start date, number of runners and leaf area are also influential traits that can be used to manage strawberry breeding programs and economic production. 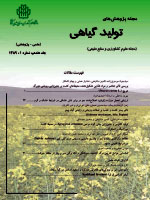